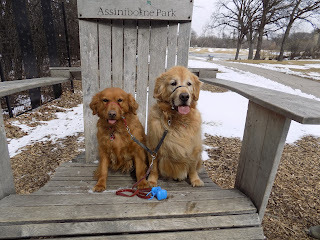 This morning, a nice fall crisp one, I took the dogs for a walk.  I know that you are not supposed to talk to strangers (but I will talk to almost anyone) but as we were strolling along we chanced to encounter a gentleman walking his dog.  This dog was harder to control and the man was trying to get him to sit for me to continue on with my dogs, without much luck.   In the meantime mine were sitting and waiting patiently for the new comer to continue down the street.    This dog, a pure bred Doberman, was making a coughing sound and eager to meet two new furry friends.  The man and I established that the three dogs were friendly and let them meet each other.  They were all happy to make a new friend.

The man was quite curious about the leads that I was using and started up a conversation as the one that he used was not working so well in controlling his dog.  So we discussed the merits of the Halti harness versus the Gentle Leader (my preferred harness).  He was quite impressed with the Gentle leader and the way it controlled the dogs.  He also shared that his dog, now called Bruno, is a rescue, had spent most of his two year life on a chain and had sustained some sort of damage to his throat as he could no longer bark, only make the coughing sound that I had heard.  This dog certainly had a sad story.  I also learned the man’s name and where he lived and that he did shift work.   So as we were chatting I told him that I was a priest with the Anglican Church and without pause he said, I’m Anglican. I quickly figured out that he had not been there in a while since he referred to it as the Church of England.

It was a friendly visit, a chance encounter of two dog owners who happened to be walking the same sidewalk on the same morning but it left me thinking about the comment “I’m Anglican.”  This man, like numerous others that I have encountered, still claim some loose affiliation with the denomination but for some reason are no longer in attendance.  My question is not so much why he doesn't  attend a church but where has the church failed?  Why are we not engaging people?  Why have people walked away?  Is it disillusionment?  Work commitments?  Family engagements?  Hypocrisy of the institutional church?  I am sure that there are any numbers of reasons that people can provide by way of explanation.  Yet, there is still this claim to the denomination even if the person has not been in a while.  The challenge then, I think is to meet the people where they are enter into conversation, it doesn’t have to be deeply philosophical, and let a chance encounter change both parties.  I once read “God meets us where we are, but he doesn’t leave us there” and I hope that chance encounters like the one I had this morning plants a seed in both the man that I encountered and me so that there will be more encounters, more conversations and that we will both be richer for the experience.
Posted by Paths toexplore at 14:05