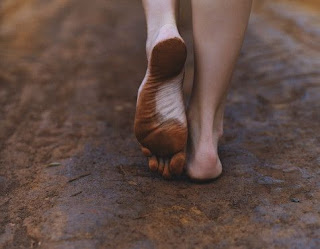 Wanderer, there is no path,
the path is made by walking
Antonio Machado


This quote came in my emails just a few days ago and it reminded me of a hike that I did with a group of people many years ago.  A group were planning to hike Killdevil Mountain in Gros Morne Park.  They had acquired a guide and were looking to add a few more people to the group.  My DH thought I would love it and signed me up! 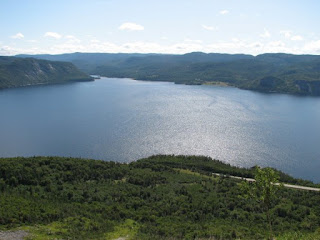 Here we are...
about halfway and you can see how small the road is already 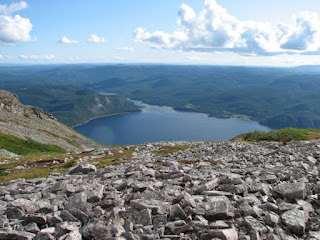 The Top... just joking we have not yet reached the summit.
It was merely wishful thinking! 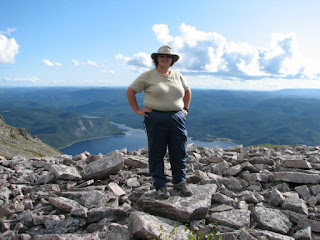 This is truly the summit, mountains in the background and
the water has gotten considerably smaller

I got a little more hike than I had planned on.  You have to understand that there is no trail up this mountain you meandered up the caribou trails, made your own path across a mountain that had an approximate seventy degree ascent.  Rumour had it the climb would take a couple of hours ... I wish! I remember that we kept going and going.  Eventually we would reach what I would think was the summit and think we are at the top, only to discover there was yet another level to go.  Two hours turned to four and finally I was at the summit.  It was quite a hike.  The views were spectacular.  It is at those particular moments a bit of pessimism sets in for me.  While I gloried in the achievement, I was also thinking of that journey down and was not looking forward to it.

The key to going down was to walk back and forth across the mountain so that the decent would be less steep.  Some members of the group sat down and slid down the lichen and moss.  I confess I was tempted but it looked like a bit of a rough ride. 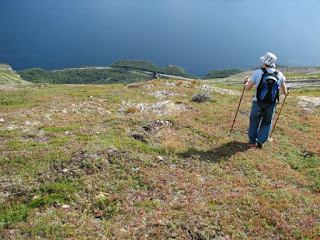 The answer is YES!
This is as steep as it looks and see no trails

Like many of the journeys in life sometimes we have to plod our own path.  The path is not always clear but one thing is for certain if we do not make the attempt or start to move there will never be a path.  Life with all of its challenges and journeys is exciting.  Each day brings new possibilities, new explorations and new paths to explore.  Some will be well worn and familiar and I think it is here we take comfort and rest.  Others will be brand new, unexplored possibilities where we have to find our own way.  Face challenges. Find inner strength.  Realize that life is filled with all sorts of experiences.  Know that each of us has a unique path that we can only truly experience if we are willing to walk and sometimes make a new trail.

“First, he says, you have to go out into the world. This is not a simple matter of going outside one's door. No, that is simply going out. That's what one does when one is on the way to the store to buy a loaf of bread, some cheese, and a bottle of wine. When one goes out into the world, one is shedding preconceptions of past paths and ideas of past paths, and trying to move freely through an unsubstantiated and new geography.”

― Jesse Ball, The Way Through Doors

Posted by Paths toexplore at 18:46 No comments:

Can I Have this Dance? 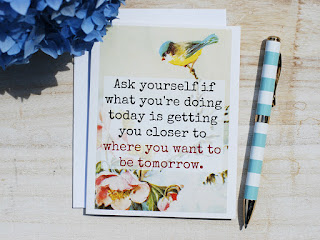 Several weeks ago, my DH, niece and I made plans for a small road trip.  The weather forecast was uncertain.  It called for thundershowers and quite likely  thunder and lightening to go along with it. Given that we planned to spend much of the time outside once we reached our destination we figured alternate plans might be a better decision.  It was a Saturday morning, that means farmers markets and treasures galore.  We meandered around, admired many things, bought a few items and generally enjoyed the time.  Fresh vegetables from the farmers are always a welcome buy and there were lots of choices.

As I was making my way back from dropping off items to the car I noticed a child playing in the puddles from an earlier shower.  This child was taking great delight in splashing in the muddy water and entertaining those close by who were observing and enjoying the joy and happiness of the child.  It was a joyous display of life, enthusiasm and that willingness to just dance and it didn't matter much who was watching. 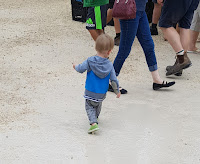 Did that child have a plan for today, likely not!  What it did show was unadulterated joy.  A zest for life that we could all use.  It was the most important place that child could be in that moment.  It most certainly was not a recipe for great success but it was a reminder to  find the joy in life and more than that to not avoid the puddles in our path, instead take a moment to play and enjoy life.

Perhaps we needed the rain in our lives after all.  Not just to refresh nature around us but to refresh ourselves as well so that our outlook could have a new perspective, our creativity new possibilities.  That we find an opportunity to become unstuck and to dance in the puddles. 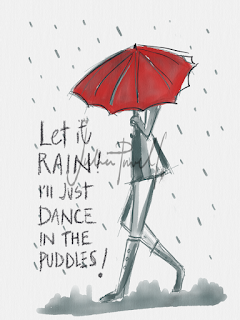 Where will you look? 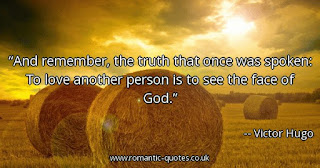 When he had walked about thirty blocks, he was tired. He needed a rest, and so he walked over to the park across the street and he sat down on a park bench. Then he met an old woman who was aimlessly walking round the park. She sat down on the bench next to him and started staring at some pigeons. The boy sat there, next to her and opened his book bag. He was about to take a drink of his root beer and eat a twinkie, when he noticed that the old lady looked hungry, so he offered her a Twinkie.

She gratefully accepted it and smiled at him. Her smile was so pretty that the boy wanted to see it again, so he offered her a root beer. Once again, she smiled at him.

The boy was delighted that the woman was very happy now.  They sat there all afternoon eating and smiling, watching the squirrels and birds and eating twinkies, drinking root beer...

The Twinkies and Root Beer were gone and as it grew dark, the boy realized how tired he was, and how late it had become, and so he got up to leave. Before he had gone more than a few steps, he turned around, ran back to the old woman and gave her a hug. She gave him her biggest smile ever.

When the boy got back home and opened the door to his house a short time later, his mother was surprised by the look of joy on his face. She asked him, "What did you do today that made you so happy?"

He replied, "I had lunch with God." But before his mother could respond, he added, "You know what? She's got the most beautiful smile I''ve ever seen!"

Meanwhile, the old woman, also radiant with joy, returned to her home. Her son was stunned by the look of peace on her face, and he asked, "Mother, what did you do today that made you so happy?" She replied, "I ate Twinkies in the park with God." But before her son responded, she added, "You know, he's much younger than I expected."

I was asked today if there was a problem with my blog, and had it suggested that I would need to check if I was actually sending out the message.  After a minute or so I realized that the reason the person was not receiving the blog was because they mistakenly thought I had written something that they had missed.  Sadly they haven't missed a thing as I have not posted any articles in quite some time.  There are several works in progress but unfortunately they are incomplete.

However, on the return home from an afternoon movie I caught some lyrics of a song on the radio.  I have no idea who was singing but it basically asked the question where do I find God?  This triggered the memory of the story (posted above) of twinkies and God.  So the drive home was a percolation of the brain and how I might finally be inspired to write something.

Where do we seek God?   It is an important question and I think it goes hand in with another question How do we show God?  The story of Twinkies and God is a beautiful illustration reminding us that we can find and see God everywhere.  It basically requires us to look, to be in community with one another and to see the ability and beauty of a person rather than getting caught up with what we think should be a more complicated process.   The little child and the elderly person shared a bench, shared a meal and shared the presence of each other and as a result they both returned home believing that they had seen the face of God.  Likewise, we are asked to truly look at one another to share our time, a meal, a presence and in so doing the infinite love of God continues to be seen and experienced through the love that is present in that moment.

Where do you see God?  Where do you look and perhaps more importantly will others see the face of God when they have an encounter with you? 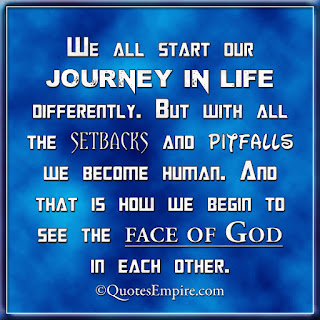 Posted by Paths toexplore at 18:14 No comments: