Many years ago, in fact when I was a high school student, it was quite popular to have penpals. These penpals could be in the same province or they might be a world away.  It was always incredibably exciting to receive a letter.  The person writing might share something about their culture, stories of their life and family or what the current news of their life was,  Sadly, they were friendships that did not endure beyond highschool.

The letters and relationships that were built for that period of time were interesting ones.  My penpals were all across the globe.  Carol lived in Birmingham, England and had planned to be a nurse. Sophia lived in  Greece and always included hearts and drawings in the letters and Chiaria lived in India, was Hindu and had very different customs.  Each one added a different dimension to my life from the stories and descriptions that they included in the letters that we shared.

Writing letters is a lost art. It is rare to receive a letter in the mail, but when a letter does come it is still an exciting event.  My DH and I rarely write letters but we are known for sending postcards to a select few people when we travel and include the news of what we are doing and what we saw at this particular place.  As we pack up the house that we currently live in in preparation to move to our new home I packed a memory box that contains the handwritten letters of my DH from our dating years in the early 1990's, before the convenience of email and texting and free calling.

Today I received a rare treat.  I was on the receiving end of a letter in the mailbox.  I eagerly opened it and sat back with a cup of coffee to read the words of my friend, to hear her news and just catch up.  The discripton of her area and the lovely things to see are a temptation and it was easy to feel as if you were there in her living room  sitting across from each other and visiting.

Although I rarely sit and write letters anymore, unless we are travelling,  I do still greatly appreciate them and the excitement of pulling that envelope out of the mailbox and even more I appreciate the person who takes time to sit, put pen to paper and write.

In an age like ours which is not given to letter writing, we forget what an important part in played in people's lives 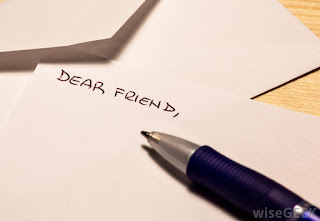 Posted by Paths toexplore at 17:36