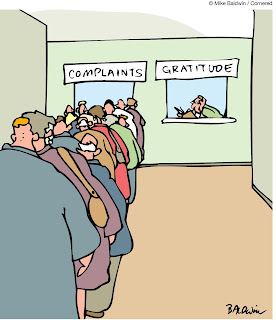 A few days ago a friend posted this cartoon.  While the cartoon is intended to be humorous it is also a sad commentary on how quick we are to complain and how slow we are to pass on appreciation. Along with this post there were numerous other friends who have been posting sayings such as when you can choose to be anything, be kind.  There is nothing wrong with a reminder to be kind to one another.  There is also nothing wrong with forcing ourselves, even with the above humour, to consider our attitude.

Attitude goes a long way.  Are we known for a positive or negative attitude?  Are we known to complain a lot or for being a thankful, grateful person?  In a sermon the preacher conveyed an encounter that he had.  He told of an incident where a mother and her son were disagreeing on an issue.  It ended with a much disgruntled young person.  The mother simply looked at him and told him that he needed to change his attitude.  That mom had no issue calling her child on a bad attitude or a sulky after effect.  Reminding him that all was not bad in his world but that on this occasion everything  was not going to go his way.  It is a lesson that we all learn at some point, win some and lose some.  Be gracious what ever the outcome.  The preacher went on to emphasize that sometimes we all need that reminder...change your attitude.

So what is our attitude?  Are we gracious in wins and losses? Do we openly show our appreciation and gratitude or merely lodge the complaint(s)?  Are we inclined to pass along kind words that tell a person how appreciated they are or the first to line up when something has gone wrong?  Are we a healthy balance of both?  The cartoon made me think!  The cartoon, brought a smile to my face but it also made me ask do I complain more than I express appreciation?  Do I need to change my attitude?  Living in a society where we often expect immediate gratification, there is no doubt that we all have days where we need to change our attitude.

The cartoon though is a timely, light reminder of a more serious issue.  We forget to say thanks for a job well done.  We forget to convey the message that we appreciated the service that someone offered thinking they already know.  We forget to pass along the kindness.  And that may make all the difference to that person for that moment in time.

There once was a young man who struggled in his professional life.  He often heard negative comments about his work and negative comments of a personal nature.  He avoided colleagues and as a result became known for being unreliable.  When another person said they were going to reach out and make an effort to include him more, give him a schedule to participate in they were laughed at and mocked for making the effort.  Much to the surprise of the nay-sayers the young man responded and was faithful to the schedule that he had agreed to be apart of.  Good things happened on many of the occasions that he participated in and others began to tell the scheduler of how well things were going.  The scheduler, hearing the compliments, decided to mail a note of thanks for the additional effort to let the young man know that it had not gone unnoticed and that it was much appreciated by those that he was interacting with as well as the volunteers that were there to help.  It would be several months later when the young man and the person doing the schedule would be face to face.  At that time he asked if he could speak privately and the interaction for the person doing the schedule was rather shocking.  The young man pulled out his wallet and there was the note card, very worn from the folding and unfolding.  It had obviously been read many times. He went on to tell the person responsible for the schedule that he had gone to the mail and it was with some trepidation that he opened the envelope which contained the note.  He went on to explain that anything he received in the mail was generally not good.  He was shocked when he opened the envelope and read what was inside.  A note that expressed thanks for the work and the extra effort that he put into what he had been asked to do.  He said he had never gotten anything like this and he was so grateful.  The person responsible for the schedule had honestly not given any further thought to the note.  Was somewhat shocked at the reaction and responded that they had heard good things and thought it was important to pass it along.  The note was refolded, replaced in the wallet.  Each of the two persons moved on but for that time it made all the difference.

The thought that a note with a few kind words expressing gratitude for a job well done is not a regular occurrence is sad.  We are quick to pass along a complaint but less so with a compliment.  Somehow we assume that the person already knows if they have done something well.  But really, how would anyone know if we never take the time to tell them?  So can I encourage all who take the time to read this blog to not waste another day before complimenting someone, thanking someone, appreciating someone.  Let them know that their efforts have not gone unnoticed because the smallest of kindnesses make a world of difference to the person who receives the expression of gratitude. 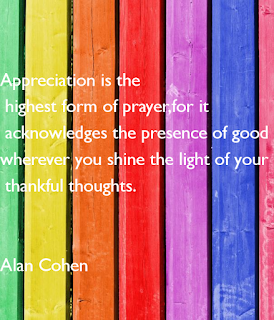 Posted by Paths toexplore at 09:24