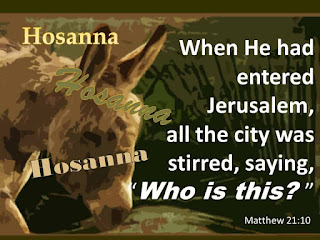 Palm Sunday is a day of contrasts.  We have the glorious events that Matthew 21:1-11 tells us about.  There is the  pomp and pageantry of the spontaneous parade as Jesus seems to be welcomed by some to Jerusalem and then, traditionally in a worship service, we switch over to the passion narrative in which the events of the coming week unfold.  We go from triumph to tragedy.

Parades and red carpet treatment, celebration and fanfare; Jesus is at one of the highest points of his ministry.  People took off their cloaks and spread them on the ground to be walked upon.  Others looked and searched around for something close at hand that could be used and branches from the trees were swiftly trimmed.  What excitement, what pageantry, what fanfare!  The disciples must have been on a high over this reception.  Dare they hope that Jesus' foretelling of his death was nonsense?  Dare they hope that there were better days ahead and that they would go from one success to another?  Or were they wary?  Aware of the unrest and the political climate of the time perhaps they were concerned that this was really not a good time, politically or religiously, to be quite so popular.  They are moved along with the parade and the excitement despite any concerns they may have.  And then, as they enter Jerusalem as people watch the procession and feel the excitement the inevitable question comes, "Who is this?"(Mt 21:10b)

Had people joined in without knowing what all the fuss was about? It could easily happen.  I remember a time when Edmund and I were travelling and were in Paris a number of years ago.  We were on the street near the Notre Dame.  Bells began to ring, the street began to fill with more people and the crowds were lining both sides of the street.  We had no idea what was happening but we had no problem getting into the procession.  We tried to get closed to the edge of the sidewalk for a better look and to see what exactly was happening.  Police cars led the way.  Religious officials poured out of the Notre Dame in full regalia.  Excitement kept mounting.  Prayers were being said.  Tears were pouring and the excitement kept mounting.  We were not about to miss whatever this was.  Eventually, a lady in the crowd took pity on us and explained that after so many years the bells had returned to the Basilica.  Quite by accident we were part of the excitement and we stayed in that group to watch history unfold as the procession of the bells made its way up the street.  The excitement was contagious.

Would it have been any different at this procession on Palm Sunday.  It began so small, seemingly with out great expectations and as it moved along it seems to have morphed into something greater.  Would we wonder what was going on or what all the fuss seemed to be about?  We know that this was a great day.  And we know, thanks to the account that Matthew offers, that not everyone knew this person.  It was obvious that there was a fuss being made over someone of no great significance because important people rode impressive creatures not lowly pack animals.  And so, some asked "who is this?"  The answer is offered  by some person in the crowd they enlightened those who happened to be on the sidelines.  But like those who initially answer the question we too are called to ask this question in our own lives, Who is this and how will our lives be changed for knowing?

Posted by Paths toexplore at 09:44