This blog was interrupted..... by the Phantom 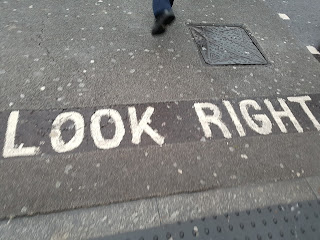 Streets here have these most helpful signs so you know where to look for traffic.

I missed blogging yesterday so it will be a two in one.  While we did a bit of the London sites yesterday, we did not cover nearly as much ground as we did today!  So be prepared to be exhausted.  Yesterday started with breakfast with our young Newfoundland friend who is studying here.  He rarely se misses a chance to meet up with us when we are in Europe and it is always lovely to see him.  Sadly all three of us forgot our usual selfie, and after him teaching us how to do the selfies!

Late afternoon took us off to Piccadilly Circus and scoping out where the theatre was located for the evening production of the Phantom of the Opera.  Yes, I am well aware that we saw it just earlier this year in Winnipeg but it is a favourite of both my DH and I.  When we read that this production has been running for 35 consecutive years on the stage here we needed no further convincing.  We were not disappointed, but my dear readers you will be!  No photos were allowed at all so you are dependent on my ability to describe it to you.  I hope I have adequate words.

Our seats, in the orchestra area of the theatre were wonderful.  The music phenomenal,  there is nothing quite like those opening bars on the organ as the play gets set to begin and there is nothing as simplistic or beautiful as the monkey on the music box tinkling the lines of the music for the song “Masquerade”.  Costumes were unlike anything I had seen before, right down to the period shoes.  Elaborate, sparkly and breathtaking.  The actors of the production did not disappoint with their singing and acting and despite knowing the ending, despite the Phantom being somewhat a villain I could not help but shed a tear in the final scene when he lets his love go knowing he will be left alone.  The pain and excruciating agony that the actor portrayed made you feel his agony and loss.  And yes given the chance I would watch it again and again and again.....! 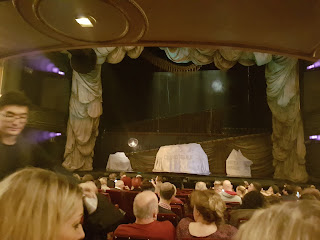 Only picture that was allowed right before the play started

We did enjoy the Piccadilly Circus and had an enjoyable meal before the production.  We thought we would sit and have a drink when the play finished but by then everything was closing down.  Dinner was a memorable experience.  I had a simple kebab but my DH decided to enjoy a steak.  What he did not realize was that you cooked it yourself at the table on a hot sizzling stone, fortunately he is more than adept at cooking a steak. 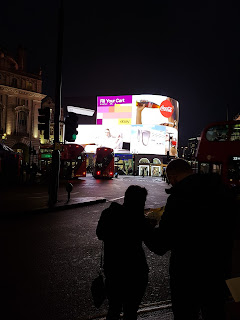 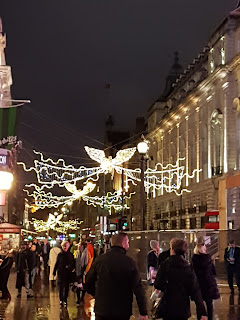 Today we have been playing on the tube.  I think we’ve taken nearly every line except the one that will take me to Paddington Bear and as excited as I was to be on the Platform 9 3/4 I am pretty sure Paddington is more exciting for me.  Gotta love that cute little bear.  But I digress, we walked along the Thames today, enjoyed the London Eye, found out where we need to be to catch our bus for a tour tomorrow, enjoyed fish and chips and walked miles and miles. 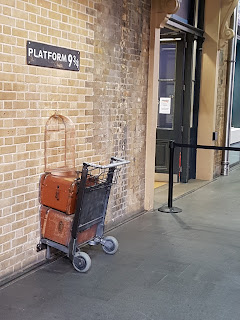 It was interesting at one point to find a garden for quiet contemplation in a very busy area of the city and at a chaotic intersection.  I was doubtful that one could quietly contemplate anything there, but I thought I should at least explore it.  Sure enough when you walked in the garden it seemed to become quieter.  You could sit on a bench or wander around.  You could sit quietly and the busy street just a few feet away faded into the background.  There was little in bloom but that did not distract from the quiet simplicity that a weary seeker could find here for a short time. 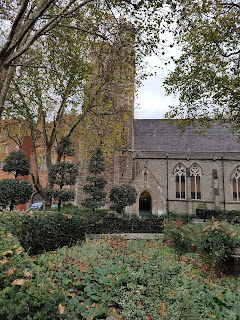 St. Mary's  and the garden for quiet contemplation and prayer 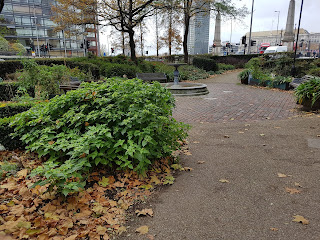 The London Eye was spectacular.  You went into a capsule type hold, on what looks like a giant Ferris wheel, and it slowly ascends to give you a view of the city.  And what a view it was!  We had a birds eye view.  We looked down on the Parliament building and Big Ben, saw St. Paul’s cathedral in the distance, had the building of MI6 pointed out (I thought they only existed in the movies) and a multitude of other landmarks! 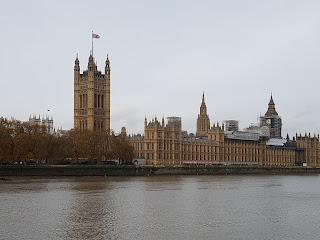 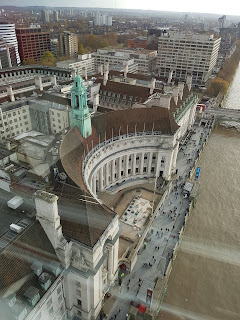 One of the views all g the Thames as we descended 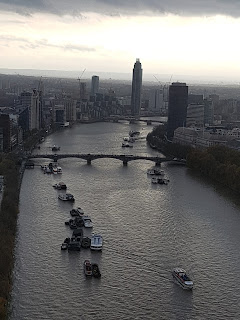 A look at the skyline and Thames 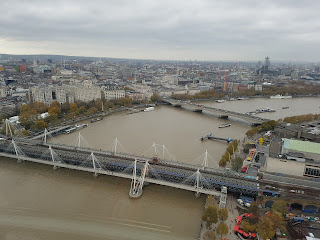 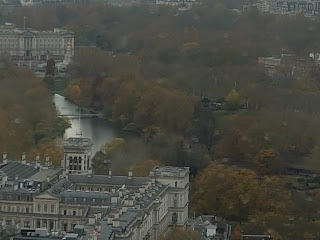 Some of the views below 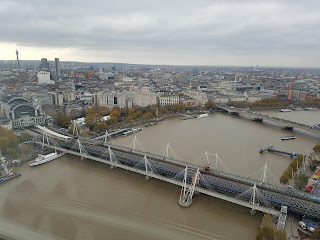 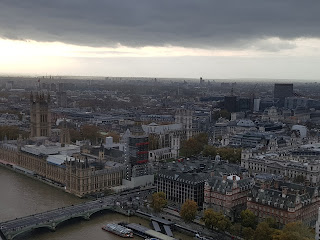 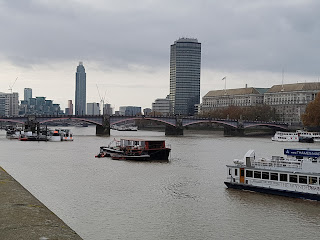 Walking along the Thames 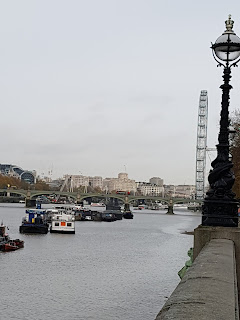 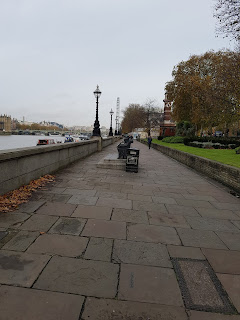 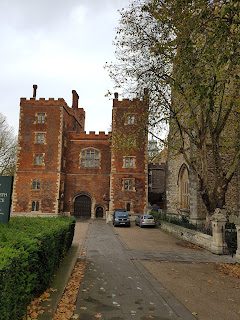 Enjoy the views from today and a few glimpses of yesterday.  Tomorrow we are off to get in touch with our pagan roots and plan to explore Stonehenge... yes that is on my bucket list and my DH agreed to go along for the ride.

Posted by Paths toexplore at 11:09