A Straight Road....with a Detour 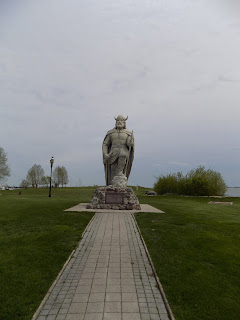 Today's journey was a long overdue treat as our Deanery Meeting took us to the scenic town of Gimli.  It is know for it's Icelandic influence and for the Gimli Glider, an aircanada craft involved in an unusual incident.  There were a number of new faces at the table today as a few of the retired clergy living in the area came out for the meeting, reminisced and shared in the fellowship that surrounds the table.   Following the meeting we went to the Seagull Restaurant for Lunch and then a small amount of exploring.

The Road to Gimli was straight, should be easy enough right!?!?  If you know me at all then directions are not my strong point so GPS is a favourite piece of technology.  Getting to Gimli and finding the Lutheran Church was easily done, finding the restaurant also easy (helps that they have numbers for street names) but the time after the restaurant was a bit of an adventure!

Highway 9 is not clearly marked and if you are not aware you can easily end up in a subdivision on the opposite side of town.  And just because a mailing address is in  a particular community does not meant that you do not have to trek down dirt roads in what seems like the back of beyond to find the elusive coffee bean!  Thank goodness for my trusty GPS of I might still be exploring some farmer's fields.  But success was mine and I managed to secure my favourite Mexican Bean for roasting!

Yes, the road is straight so the drive was mightily uneventful and the joke that we have in Newfoundland that you can sit on your porch here and watch the dog run away from home for three days holds a certain amount of truth.  It is flat or as one local corrected me today it is wide open space...yes that would be code for flat!  Good news however, the journey ended at a huge body of water, I was told it was the Prairie ocean, just smell the air....nope not doing it for me!  I am an Atlantic Canadian more specifically a Newfoundlander and when I smell water I smell the salt  of the North Atlantic...so sorry but nothing in the smell for me.  The scenery, however, was beautiful, it is not the ocean but it is just lovely.

So enjoy my foray into exploring a little closer to "home"! 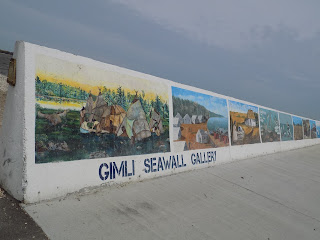 These are pretty self explanatory, it is a gallery on the sea wall 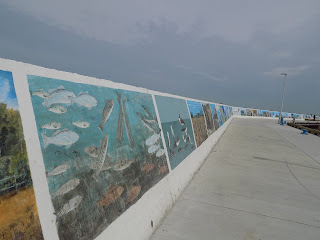 You can see that they cover most of the area 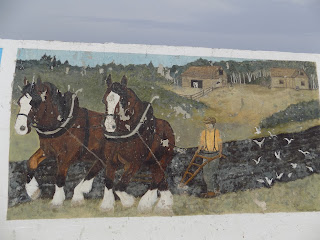 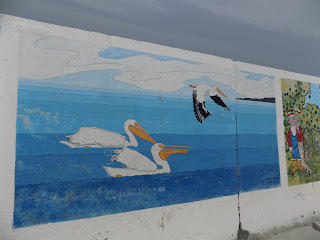 Pelicans are a common sight in the area 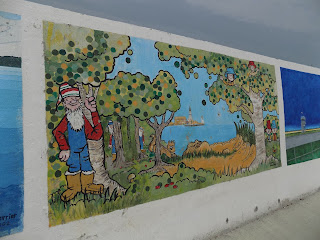 This one depicts some local lore of the elves; they can apparently still be found here 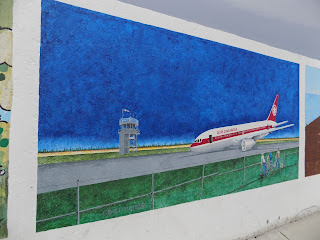 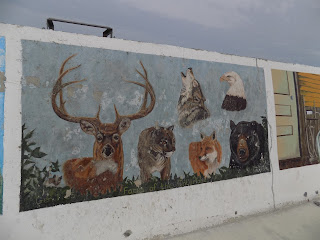 Faces of the Interlake 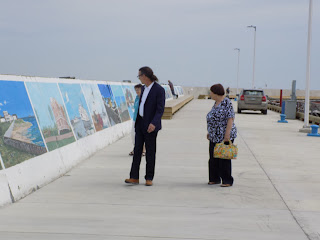 Some of the clergy at the meeting taking in the scenes 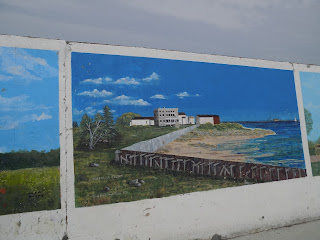 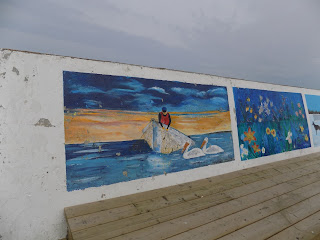 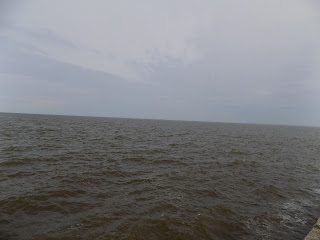 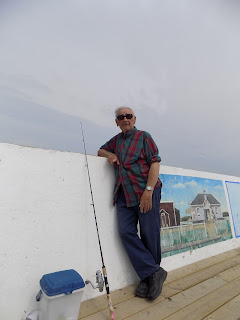 A local man suggested that I take a picture of his mural, I assume he meant the blank piece of wall so I suggested that he could be the mural instead!! 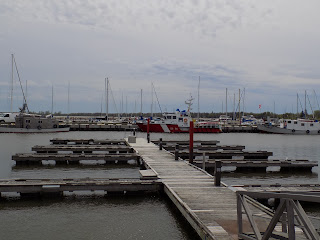 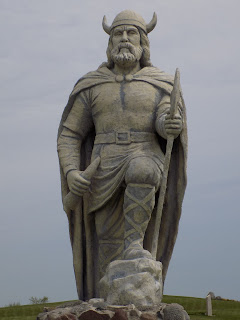 This is a huge monument, it celebrates the rich Icelandic History of the town 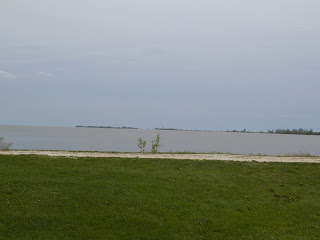 Another view of the Ocean!!!! 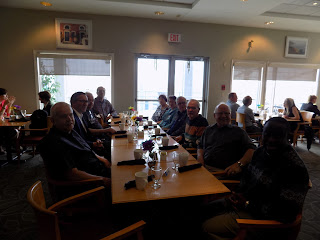 The Deanery members gathered for lunch at the Seagull Restaurant!
Posted by Paths toexplore at 15:51 No comments: 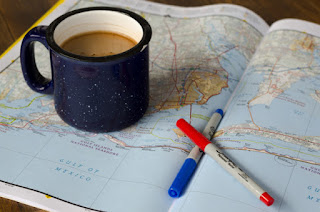 I just realized that a significant amount of time has passed between writing, when I checked the date the last one was May 5.  The weeks have been busy with normal life events, for a priest anyway!  So after lots of running to and fro, this morning I planted myself in front of the computer in an attempt to write. My first thought was I should wait as tomorrow I have a road trip, there is a meeting in Gimli. Much to the dismay of many of the locals here in Manitoba we have not explored the area at all and NO we have not been to Gimli so tomorrow, thanks to a meeting I will be there for the first time. Next week is the clergy conference at Pinawa so a little more exploration and hopefully there will be a few planned events as we are staying put in Manitoba this summer.

One question that has been repeatedly asked in the last few days is how my summer is going to slow down work wise?  When do I expect to have less on my schedule?  I find this to be an odd question and my answer is that I don't.  Already planning has started for the Vacation Bible School and the Sunday School has been engaged to help with the decorating -- they love to help and making bugs on vines, spiders and perhaps a few snakes seems to be most enjoyable to them!  This year our theme is a rain-forest adventure and the hall will be transformed into a spectacular place thanks to the many volunteers and enthusiastic youth of the congregation. Then there are the regular services, Personal Care home services and home visits so I fail to see how things "slow down" in any real way with the exception of fewer meetings!

Summer is I suppose a traditionally slower time as school is out, vacations are in and people are travelling to various places and events.  So while I understand the sentiments of the question it is not one that I have a great grasp on and am perhaps a poor choice to ask the question of, that said I am looking forward to the eventuality of experiencing it!

So, I will put fresh batteries in my camera for pictures tomorrow, plan to visit the green coffee bean shop in Clandeboye, have a great meeting with colleagues and then home and off to the Care givers Support group.  So hopefully some good writing to come as well as a few pictures of the journey.  Really what could be better than a short road trip with scenic areas and a great coffee shop to visit and hopefully acquire green beans to bring home for a lovely fresh roast. 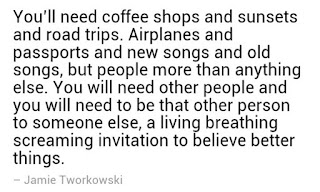 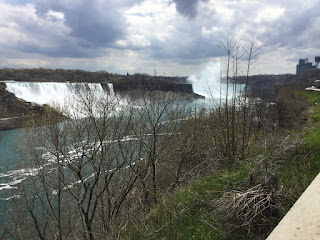 For many years our holidays were road trips from Newfoundland to Ontario.  We spent time exploring the provinces of the maritimes, collecting interesting bits of art from unknown artists and seeing the many fabulous tourist stops and discovering many hidden treasures.  This week we are back in Ontario exploring bits of Toronto but spending more time on the Niagara region.  We have reconnected with friends and gone once again to see the spectacular falls of Niagara.

The Falls never lose their majestic beauty, the noise of the roar never ceases to impress and the beauty of the area is to be soaked in.  My first experience of the falls was when a post card arrived in the mail box from my aunt.  When you are growing up in a very small town in days that travel was not something that was done it seemed that the prospect of ever getting to see this in person would be an unlikely event. 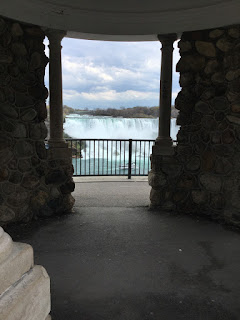 It has been many years now since my very first visit to Niagara Falls and this visit is no less impressive or spectacular as I stood enjoying the beauty, listening to the roar of the water and watching the birds soar in and out of the mist that the falls created.  The sheer beauty of this piece of creation still amazes me.  As we looked in the gift shop for a postcard I was reminded of that long ago post card that arrived in the mail for a little girl, in an isolated village where the vision was merely a dream of someday.  Now, many, many years later, there have been several opportunities to enjoy the sheer majesty, to be soaked by the mist and simply enjoy the beauty of creation visiting this wonder of the world. 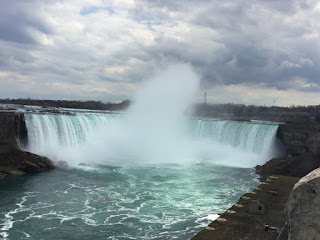